American Ultra is the story of an underachieving, weed-smoking white guy who is a former CIA operative whose memories of his life as an agent have been wiped.  When the CIA decides it’s time for him to be purged, his killer instincts kick in and he realizes he is more than he seems.

As I said in previous posts, I use MoviePass now so I can see a different movie every day for only $30 a month.  I told my mom it’s like “use or lose” leave for the cinema.  Since American Ultra was heavily advertised as a “stoner film” I had low expectations of seeing any black people.

Since I intentionally don’t do a whole lot of investigating before I choose the film I want to see, I was pleasantly surprised to see John Leguizamo.  He is probably one of my favorite Latino actors and in my top five comedic actors/stand-up comedians of all time.  I am talking all the way back to House of Buggin’ in 1995 on Fox!

But Leguizamo’s character troubled me.  He said “nigga” an awful lot to the main character.  I *think* I understood what the writers were trying to do.  I mean, one would not expect a small town West Virginia hustler to be politically correct.  And yes, I’ve seen plenty of Latinos say nigga (and it does not bother me) and I have seen black people call white people nigga (and it does not bother me).  But there was something about John Leguizamo delivering these particular lines to this particular character that bothered me. 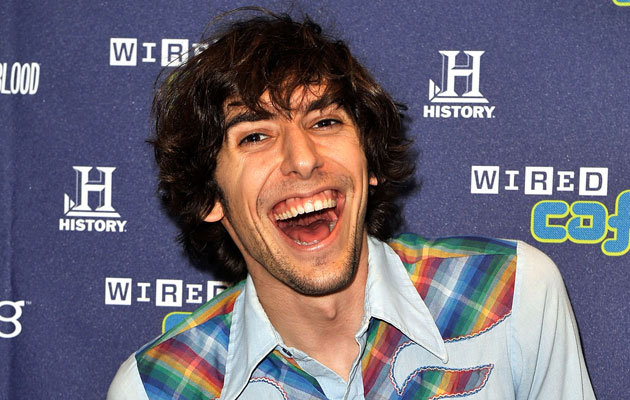 Maybe it’s because this guy, Max Landis, wrote American Ultra.  Not exactly who I have in mind when I consider who has the agency to say nigga.

At any rate, I would be remiss if I didn’t mention that John Leguizamo has a great body for a man of a certain age. 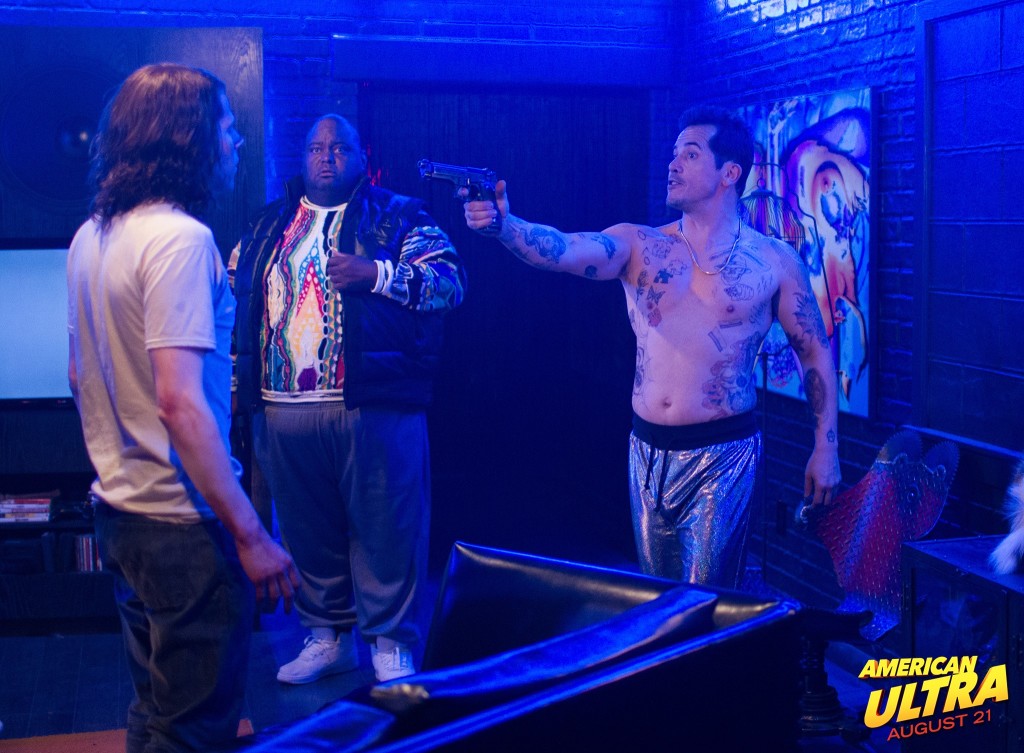 Which brings me to the black people who are in American Ultra.  You already see Lavell Crawford pictured above.  There was also Sam Malone, James Moses Black, and an actor who played one of the assets (not sure which one, but he had dreadlocks).

You know, considering I had low expectations, I was disappointed anyway.  Unlike Vacation, which had stellar, but brief performances by Keegan-Michael Key and Regina Hall, the appearances by every black actor in American Ultra was forgettable.  I don’t think the acting was bad, per se, but I think the dialogue was just blah–for the black actors as much as the rest of the entire cast.

You know, I really tried to like the film.  It had a creative premise, fun action scenes, and believable performances by everyone, I suppose.  And it was much more of an ensemble piece than I expected.  But the plausibility of a plot is important to me, no matter how far-out it might be.  Could it happen?  If it could happen, is the script making me believe it?  Are the actors?

In this case, I think the actors tried, but they couldn’t make a wack script hot.

At the end of the day, I could have randomly caught this on cable and enjoyed it.  I left the theater feeling annoyed.

So yes, American Ultra has black people in it–but it might as well not.

There were a million and one ways Hollywood could have messed this movie up.

Thankfully, they did not.  They started by having the presence of mind to cast black actors in the role of actual black people.

They don’t always get that right.  But this time they did.

There are a lot of black people in this film.

Ironically, but perhaps authentically, a many of the stadium concert scenes were filled with white extras in the seats.  I found that somewhat odd, but I never went to an NWA concert as a child, so perhaps that was accurate.  It is a fact (don’t ask for sources) that hip-hop earned its wealth through album sales in the white suburbs.  So the concert scenes in this film were a very subtle, but powerful nod to that idea.

When I first heard there would be an NWA movie, I was scared that it would be wack.  Now that I’ve seen it, I am truly happy with how it was done!  Most, if not all of the roles were cast perfectly.  To me, the standout was Jason Mitchell as Eazy-E, but every actor did a good job.  I was very happy to see Aldis Hodge as well–it’s just a shame that it was in the relatively small role of MC Ren.

As is the theme of my reviews, I reiterate that there are black people in this film.  However, you will not see many black women.  Although the ones you do see are depicted positively (Dr. Dre’s mom as well as the partners of the NWA leads), you will not see a conversation about the misogyny of the era and of the genre.  While that’s a disappointment, I don’t think social justice warriors would be disappointed in the authentic portrayal of the meaning of NWA as a moment in time, especially juxtaposed against the Rodney King verdict and ensuing riots.

I liked this film.  I really did.  I encourage you all to see it while it is in theaters.

I recently saw the film Vacation, a continuation of the National Lampoon’s Vacation franchise from the 80s.  It was not very good.  But there were black people in it, namely Keegan-Michael Key and Regina Hall!  They were pretty good.

Sorry I don’t have much else to say.  Wasn’t a good film or a good use of black folks.  It was the typical “Black neighbor/friends juxtaposed against kooky white family” for a scene.  Oh well, maybe next time!

I try to only support those films and television shows that have black characters, preferably in leading roles. I don’t dislike white people.  I just really make a conscious effort to support art, culture, and media that is reflective of my experience and that of my people.  I think something happens to the souls of people of color when they don’t see themselves.

So when I signed up for MoviePass, the service which allows you to see as many movies as there are days in the month for a small monthly fee, I knew I was going to have to see “white” films if I was going to get my money’s worth.

The first film I saw was Trainwreck with Amy Schumer.  I had wanted to see Dope, but that had already left my local theater.  Gallows was also on my list, but it got terrible reviews.  So Trainwreck it was.  I literally knew nothing about the movie except it was supposed to be some sort of bawdy romantic comedy with some familiar faces from Saturday Night Live and some cameos and walk-ons from other celebrities I was familiar with.

Since you can get full reviews elsewhere, I will just share the three most important things:

No, it wasn’t a predominately black cast, but I enjoyed not only the portrayal of the black people who were present, but the real (if not awkward) discussions of race among the white people in the movie.  There were a few jokes that were related to black folks/hip-hop/urban culture that clearly flew over the heads of many in my theater, but earned hearty guffaws from the people of color sitting near me.

Again, it was a great movie and I am glad it kicked off my MoviePass experience.  (And if you want to try MoviePass, please click on the link to use my referral code.) 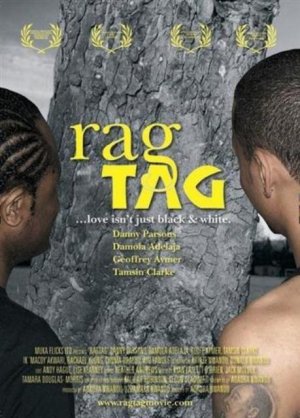 A few months ago, I watched a film called Rag Tag that had been in my Amazon wish list for literally years.  I hadn’t made a point of watching it because I hadn’t been given any particular recommendations to do so.  But thank goodness for Netflix.

I apologize for the sparseness of this review.  I had really, really intended to write a review within a week of watching it.  Then life happened.  Oops.

So Rag Tag is essentially a gay black love story set in the UK.  Basic premise:  two boys who are best friends are separated in their adolescence and reunited in their early to mid 20s.  Both have lived their lives trying to conform to heteronormativity, but have failed because they were essentially in search of one another.

The bad news is that this is a low-budget film which often looks like it.  But isn’t that the case with so many pieces of art that emerge in support of the black gay aesthetic?  Drawing on my own experience, I know that my first novel Lazarus was not a masterpiece, but it remains a sentimental favorite for many of the readers who knew me way back when.

Similarly, Rag Tag is not perfect, but it is necessary.  There is a dearth of black gay romance on television and in film, so this movie fills the void (somewhat).  It feels authentic.  It feels right.

As a bonus, the viewer will also get to see this story unfold on two continents, neither of which includes the Americas.  The portion of the story centering on Africa drags at times, but it so important in deepening the story of Rag and Tag.

Rag Tag didn’t win any Academy Awards, but it did remind me that it will have a special place in the hearts of every black gay boy who needed to see themselves depicted in a positive and realistic way.

Find it on your favorite streaming video platform or be a pal to the filmmakers and purchase the DVD. 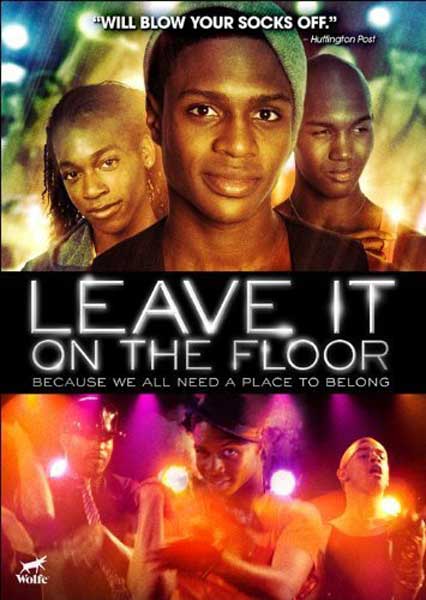 I am a late adopter to Netflix and I am not a big movie-goer, so with the exception of my DVD and Blu-Ray purchases (thanks to my all-knowing Amazon recommendations), I don’t always catch a movie’s hype on the first wave.  In the case of independent films with LGBT themes and black characters, you almost have to know somebody involved in the production to be able to support it in a timely manner. END_OF_DOCUMENT_TOKEN_TO_BE_REPLACED