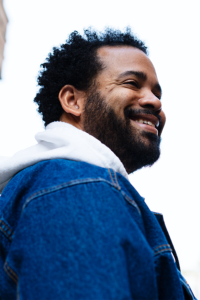 Rashid Darden is an award-winning, best-selling novelist of the urban LGBT experience, a seasoned leader of Black fraternal movements and nonprofit organizations, and a professional educator in alternative schools.  He is local to the District of Columbia and Conway, North Carolina.

His books include the Potomac University Series: Lazarus, Covenant, and Epiphany; Yours in the Bond (Men of Beta, Volume I); the Dark Nation Series: Birth of a Dark Nation and Children of Fury; the anthology Time; and The Life and Death of Savion Cortez, a volume of poetry.  His short story “Smith & Jones: Young Americans” was first published in 47 – 16 : Short Fiction and Poetry Inspired by David Bowie (Volume I).

Rashid won Honorable Mention in Genre Fiction in the North Street Book Prize for Children of Fury in 2020.  In 2017, Rashid’s play “Message from ‘The Legba’” was selected as a winner of the OutWrite DC and Theatre Prometheus One Page Play Competition.  It was staged in 2018.  Rashid won the Elite 25 Award in Literature from Clik Magazine in 2006.

Rashid is the National President of Gamma Xi Phi, the professional fraternity for artists.  He is also a member of Alpha Phi Alpha Fraternity, Alpha Phi Omega Service Fraternity, the Apollonians, and the Freemasons.  Always a teacher, Rashid has led workshops on practical topics like bylaws and governance, membership recruitment and engagement, and intersectional awareness.  Rashid’s efforts in the community have garnered him awards from Greek Tweak, the Thursday Network, and the Georgetown Black Student Alliance.

In the nonprofit sector, Rashid has served as an Executive Director, Development Director, Communications Director, and Outreach Manager.  His experience ranges from the creation of nonprofit organizations from the ground up, to developing their reputations, to the sad task of sunsetting charitable organizations that are no longer sustainable.

As an alternative school educator, Rashid has curated varied syllabi for use of educators and students, including the Nat Turner Syllabus, Moonlight Syllabus, David Bowie Syllabus, and the Harriet Tubman Micro-Syllabus.  He has taught writing and language arts in traditional and innovative ways, from lectures to project-based learning.  Rashid has used restorative practices to proven academic and social-emotional success of his students.

Rashid believes wholeheartedly in living an authentic, intersectional life at all times.  He is an out, black gay man who has experienced chaos and order, wealth and poverty, urban bustle, and rural peace.  He brings to his novels as well as his own life a sense of thoughtful disruption.  Ultimately, he believes in the principles of everyday brotherhood—that is, the parts of ourselves which keep us connected to one another in meaningful ways.