This essay has spoilers.

I saw Creed on the day it came out and it was amazing.  I will not be reviewing the film as so many reviews are already out and they are more eloquent than mine could be.

It was really, really good.  I was happy with it.  Go see it.  Immediately.

What I want to talk about is Creed’s blackness as a film.  The point of all of these essays is to discuss representations of blackness in cinema and this is a great movie to dissect.

One thing that people may want to know before seeing this film, or at least will be pleasantly surprised to see, is that the trailers are not totally accurate about Adonis Creed.  Yes, he is the son of Apollo Creed and an unnamed woman with whom he had an affair.  Yes, he was “in and out of juvie” as he says in the trailer, but this is not a stereotypical story of some punk kid who needs Rocky Balboa to save him from a life of poor decisions.

The film opens with  Phylicia Rashad’s Mary Anne Creed coming to the juvenile correction facility after Adonis’ biological mother dies.  She takes him in, and not only teaches him about his father but gives him every advantage that she believes Apollo would have given him.  Adonis actually goes from angry kid to privileged company man.  Adonis is not a street punk.  Adonis is a Huxtable.

This is not the story of a black guy who needed boxing to save him from himself.  This is not a white savior story.  Adonis has already been saved by a black woman who became his mother.

I can’t stress this enough.  Although Rocky is essential to this story because he is the connection to Apollo Creed, this is not a white savior film.  Adonis needed Rocky because he was the connection to the side of his father that Mary Anne did not want him to know–not because Apollo was a criminal, but because boxing claimed his life.  It’s like if a wife loses her husband in the line of military or police duty.  You don’t respect the profession less, you just don’t want it for your child.

So now that we’ve gotten that out of the way and we know Creed is not a white savior story, let’s talk about Philadelphia and black love. 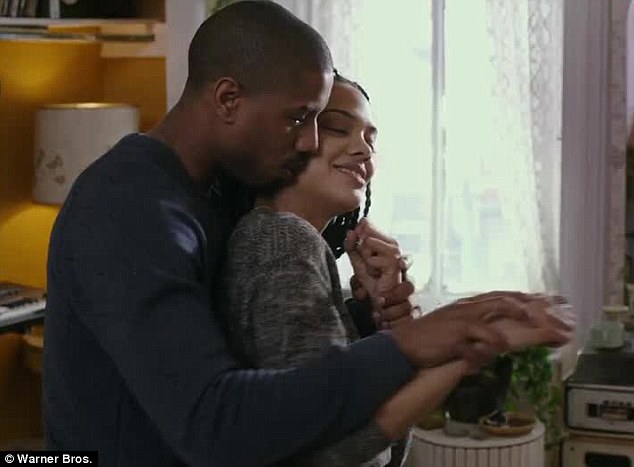 Michael B. Jordan and Tessa Thompson (Bianca) are adorable.  You immediately want them to be together.  She is clearly the less refined of the two, but again, not because she is a stereotypical “wrong side of the tracks” black girl who needs saving, but because Adonis is the one who comes from privilege.  She is also not the sassy black woman trope, either.  She’s just a regular Philly girl doing her own thing in music.

And you know what?  Shout out to the legendary Philadelphia music scene.  Black folks already know.  For the white folks, just enough names were dropped to help fill in the knowledge gaps.  Yes, Jill Scott and John Legend got their musical starts in Philly, as did many others.  But again, we already knew.  And that’s where Creed begins to tread in the waters of feeling like a black film and not just a Rocky film.  (And I do believe it’s possible to be both.)

As we get to know Bianca, Adonis, and Philadelphia better, we get a crash course in black Philly slang (jawn).  The scene where Adnois is like “So, you got a jawn?” had me hollering.  It was natural.  It was smooth.  It was authentically black.

We already knew that a black man, Ryan Coogler, the man behind Fruitvale Station, was the director, but he also co-wrote the screenplay.  To me, it’s not that he tried to make a black film, but he made a film that is authentic to the characters and their own voices, which are black.  He did such a good job.  He is only 29 years old.  What am I doing with my life?

Speaking of characters staying to to their own voices, there is a confrontation scene between Adonis and another minor character.  All I know is that Donnie called the dude “nigga” in the heat of the confrontation.  That was the moment I knew that I was no longer treading in the waters of a Rocky movie, but I was floating along in a black movie.

And what does that really mean?  It’s not just about having black cast members and a black director/writer.  It’s truly about the authenticity of the experiences and of the language of the characters.  Adonis represents the ultimate code-switch, something many black people know all too well.  In spite of our best efforts, hell yes: in the heat of the moment I, too, will call somebody nigga.  When that happened, it was jarring to hear in a Hollywood film, but also relieving.  I knew I was listening to a story that could really happen, spoken by people who aren’t afraid to just say things as they would happen.  In other words, “Hollywood” tends to make black characters in a very hyper-aware sort of universe in which their words are filtered in such a way that anyone could have uttered them.

But anyone can’t say nigga in the heat of the moment as Adonis did.  Only he could have.  And it worked.

Not so spend so much time on nigga, but it was a turning point for me.  I knew I was watching something real when I heard it.

So I’ve mentioned the casting, Philadelphia culture, language, and the lack of stereotypes.  Now I will hone in on “the scene.” 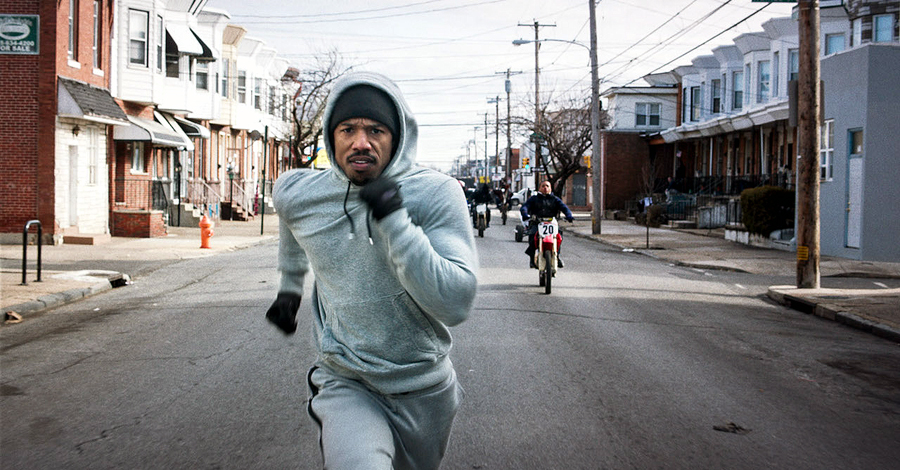 I’m just going to go ahead and tell you in advance that I cried a little.

We’re all familiar with the infamous “training scene” from each Rocky film, perhaps exemplified in Rocky II when all the Philadelphia children start running with him.  Well Creed‘s version is everything you could want in an update.  It’s got the streets of Philadelphia.  It’s got black kids on dirt bikes.  It’s got hip-hop.  HIP-HOP, you guys.  It had all those things and still had the emotional weight of each training scene from every previous Rocky film.  Yes, we know they are melodramatic and are supposed to be, and that’s fine.  It’s just that this particular version really felt like it belonged to me.

Not only was it just a very black moment on film (black faces, black music) but it was also very much for me a full circle moment.  These Philadelphia streets look a lot like Baltimore streets, and on some level, Michael B. Jordan seemed to be symbolically running from his humble beginnings as a child actor on The Wire into a glorious future as this generation’s next great actor.  And perhaps, just a little bit, I envisioned his “Wallace” escaping his untimely fate in Season One.

I do believe that Rex Walls said it best:  This is a mainstream black movie.  I think most black people will feel this way.  It is also a very good movie.  It sticks to a certain movie-making formula without actually being formulaic.  It has black characters that are black on purpose, by dictate of the legacy and by their culture.  They are not incidentally black who are given universal lines which could be spoken by anyone.  They are black characters who live in blackness but do not necessarily make political statements by their presence.

But as for Creed, really, it’s amazing and everyone should go see it immediately and then buy the Blu-Ray when it’s released.