I was beginning to feel like the movie industry was conspiring against me.  I have this great MoviePass that allows me to see a movie a day for $30 a month, but virtually none of the films out right now seemed worth getting out of the house and putting clothes on.  I was sort of neutral about seeing The Martian because I am not really a Matt Damon fan, but after seeing that my fraternity brother Christopher had seen it the previous night and enjoyed it, I figured I should give it a try.  Plus, I knew for a fact black people were in it, even if not in the leading roles.

My theater of choice was not showing The Martian, so I went to DC’s historic Uptown theater, one of the last remaining single-screen, neighborhood theaters around these parts.  I had last been to the Uptown back when the first Harry Potter came out.  When I worked for Georgetown, my department had opted to go to the movies as a group rather than the traditional office celebration.  While it was fun, I fell asleep for most of it.

Incidentally, my former boss from a different job I’d had eleven years after Georgetown was also at this showing of The Martian.  So annoying!  Luckily, he did not see me.  I really didn’t want to have to roll my eyes at him, but I was fully prepared to do so.

I headed to the  mezzanine of the theater and took my seat.  Less comfortable seating than most other theaters, but what you lost in width you gained in overall size of the screen, as well as really cool layout.  The men’s room had a sitting area.  They call it the men’s lounge.  I got a kick out of that.

By now, you already know that The Martian is a space film.  Matt Damon is an astronaut on Mars.  When a sandstorm comes through, they have to abort the mission and they left Matt Damon for dead. 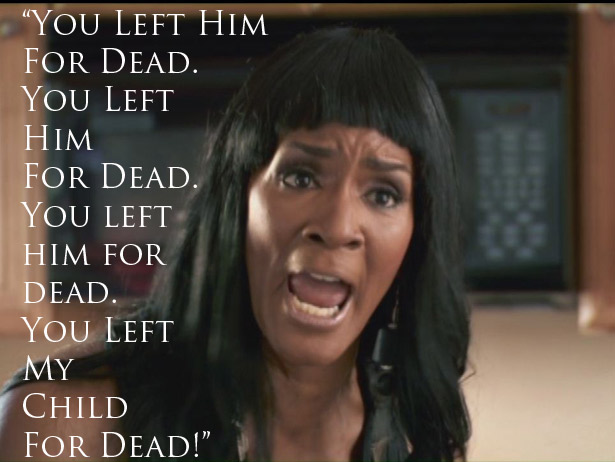 The rest of the movie is about people on Earth trying to bring Matt Damon back.  Chiwetel Ejiofor plays the head of the Mars mission.  He’s really good.  He’s just a good actor in the first place, but I really enjoyed him in this role.  He doesn’t overdo it and you really feel his anguish as well as his ambition.

I gotta say I ain’t never met no black dude named “Kapoor.”  I did not read the book this movie was based on, but I am concerned that they “blackwashed” another character of color.  Would I trade Chiwetel?  Not for anything in the world.  But I am hoping he was not “supposed” to be South Asian and they just said “Ah, fuck it, let’s get Chiwetel!”  Because real talk?  Chiwetel could have been Matt Damon’s character easily.  But more on that in a second.

Chiwetel Ejiofor was really, really good in this.  The end.

You know who else was really good?  Donald Freaking Glover.  LIKE SO GOOD.  You guys.  And he’s not just a comic sidekick or eye candy, he plays a really pivotal role in the film.  He makes black guys doing science look cool.  And sexy.  Chiwetel is also sexy, but not Donald Glover sexy.  I don’t want to say more because I don’t want to spoil it, but trust me when I say that his role is necessary.

You know, two things happened to me during this movie.  First, I cried a lot.  Like snot and everything.  I was really moved by the emotional power of the story.

Secondly, I thought very hard about how this movie could impact the children and teens who decide to watch it.  There are so many awesome moments where I was like YAAAAAAAS, I SEE YOU SCIENCE!  I used to be interested in science as a child, but literature captured my passion sooner and surer than any other subject.  But what if The Martian really did inspire more kids to pursue scientific careers?  Especially black boys, who could be inspired by Donald and Chiwetel’s portrayals of scientific cool.

But one thing nagged at me…where were the black women?  Although I did like Jessica Chastain and Kate Mara, I can’t help but think damn, why not Gabrielle Union and Sasheer Zamata?  While I don’t think a film should strive to be a rainbow coalition, it was a bummer to not see black women in the forefront.

Kristen Wiig is not interchangeable, though.  Just want to get that straight.

Back to Matt Damon.  I say this knowing there is possibility of bias because of his recent comments about diversity, but if I put that to the side for a minute, I feel the same way:  Matt Damon is not what made this movie great.  He was just Matt Damon to me and could have been exchanged for any number of white male actors that I like better than Matt Damon.  But again I say why a white male actor in the lead?  Why not Chiwetel?  Why not Anthony Mackie?  Just kidding, he’s terrible.

All in all, The Martian was great and was very nearly the best movie I saw this year.

But then I saw Sicario.