In 2011, I had started a new job with nice national nonprofit organization after having been laid off from a small local nonprofit.  For this new job, I was a program coordinator for a national writing “contest” for middle school students.  It was nice to be able to link my background as a writer with nonprofit work.

In the first few months of this gig, I discovered that some guy who had attended my college had written a play about a gay guy who pledges a fraternity.  My novel Lazarus, and its sequels, were about a gay guy who had pledged a fraternity.  But this was no mere coincidence–not only had my novel been released while he was a student, but my novel was aggressively promoted on campus.  There’s no way he didn’t know about Lazarus before he wrote his little skit.

My suspicion of his guilt was only reinforced.  I reached out to ask to read his work so I could ensure that it was substantively different, and he refused.

Needless to say, I was upset, not just because a fellow Hoya had clearly been inspired by my novel, but wouldn’t cooperate just to try to prove me wrong.

At the end of the day, my mentor told me there wasn’t much I could do unless I could prove that he had lifted passages from the actual novel.  And frankly, I wasn’t going to catch the Chinatown bus to New York just to see his rip-off Mad TV sketch version of Lazarus, so I let it go.  If I felt he was poised to make any money off of this, I surely would have pursued further action.

My mentor intimated that the best thing I could do was ensure that the people knew whose work came first and whose work was superior.

And that, my friends, is how I relaunched my career.

Since that incident, and because of it, I have become more sensitive to moral issues of intellectual property.  Not just the legal aspects, but the parts that deal with community, friendship, brotherhood, and the like.

I believe in putting others on.  I believe in Usher mentoring Justin Bieber and Diana Ross “discovering” Michael Jackson, even though that’s more narrative than fact.  I believe in sitting at the feet of elders, and mentoring, and writing groups, and all the things that build camaraderie among writers.

I believe in the class of 2005, those gay black writers who had their debut novels that year, including Dayne Avery, Fred Smith, Alphonso Morgan, and me.

I met E. Lynn Harris.  We gave each other the Alpha handshake.

It’s levels to this.

Am I a great mentor to other writers?  Not especially–I could be much better.  But I believe in friendliness and cordiality.  I am not going to hate on K. Murry Johnson’s Image of Emeralds and Chocolate because it was the first gay black vampire novel.  I bought his novel.  I support his career.  The fact that Birth of a Dark Nation has black gay vampire main characters is a coincidence that Johnson and I are cool with.

Buy our books.  You can’t get enough gay black vampires.

The point is that we have to know each other, communicate with each other, and be nice to each other.  There is room at the table for everyone to be great in my business.

That’s why this #BlackGirlsAreMagic incident currently exploding on Twitter is so problematic for me.  In a nutshell, writer Kenesha Williams has created a speculative fiction (!) literary magazine (!!) focusing on black women and girls as protagonists (!!!).  I really liked the idea when I heard about it a few days ago and automatically presumed that it had the blessing of Auntie Peebz (@thepbg), who is the originator of the phrase #BlackGirlsAreMagic as a “thing.”  She sells t-shirts and everything.

Sure, is it possible that somebody somewhere said “Black girls are magic!” at some point in their lives?  Yes, it’s possible.  But when you Google “Black girls are magic” literally every page that comes up points back to Auntie Peebz in some way, except for one: an article about Kenesha Williams’ literary magazine.

The logos are similar to me as well.  Not identical, but reminiscent.  So that says to me there may have been at least some kind of inspiration from one logo to the next.

Kenesha, sis.  You have a great idea here and I do believe a speculative fiction literary magazine with women and girls as protagonists is necessary, amazing, powerful, and absolutely on time.  And I know that literary magazines are not money-making ventures.  They are labors of love that (God-willing) get your name out there as the arbiter of new fiction, and “put on” new authors who might not be featured anywhere else due to sexism and racism in mainstream genre publications.

But you have got to change the name.

This is not a trademark issue.  This is an issue of sisterhood.

This isn’t about what you’re allowed to do.  We’re legally allowed to do a lot of things.  But this thing?  his thing you shouldn’t do.

Please do the right thing and change the name.  I want to be able to support this publication and all the wonderful emerging writers who will be featured.  But I will not support your publication unless the name is changed. 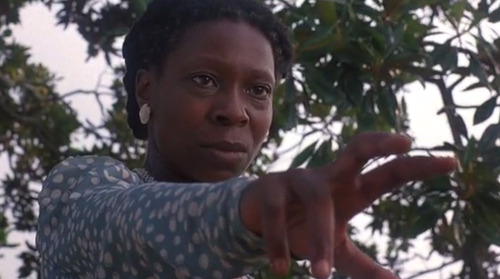