Today’s “Tarot Tuesday” entry will be a little different.  I want to delve into my philosophy and synthesize a few readings I’ve recently conducted.

Someone recently asked me if my Tarot readings were “real” or if I cheated somehow.  I suspected that they wanted to know whether I practiced the art (science?) of “cold reading.”  According to Wikipedia, “Cold reading is a set of techniques used by mentalists, psychics, fortune-tellers, mediums and illusionists to determine or express details about another person, often to imply that the reader knows much more about the person than the reader actually does.”

I wasn’t offended by the question.  There are a lot of charlatans out there.  And for what it’s worth, I don’t think I have some peculiar gift that nobody else has.

I listen to what the universe is trying to tell me through the cards and I pass it along to whoever is asking the question. 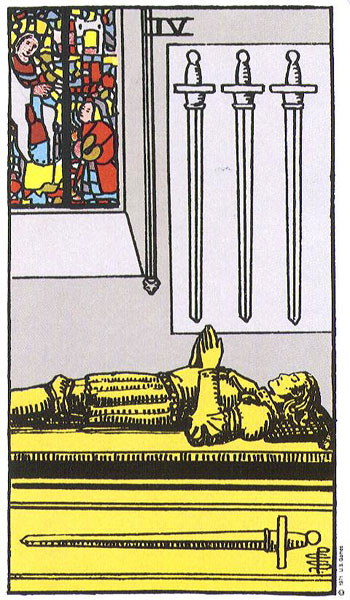 A young man I know recently embarked upon a professional journey which took him overseas.  For him I drew the four of swords.  This typically means a period of resting or recharging after a period of challenges.  But something about the position of the swords themselves was puzzling me.  Then it occurred to me that the swords represented his family.  Father, mother, and sister were heading in one direction and he was heading in another, not only physically, with his move, but philosophically, politically, you name it.

He’s doing well with his move and I’m happy I was able to give him some reassurance in that process.

More recently, I had a conversation with a woman who was having some internal debate regarding her future happiness.  I drew the ace of wands in the reversed position–a card of exhaustion and a loss of enthusiasm.  From there, she and I had a revealing conversation (details that will not be shared here) that culminated with me reminding her that she has to take care of herself before she can help anyone else.

People only ever really want to know about love, family, and career in these readings.  I’d love a reading that was about passing a class or writing a book.  But it is what it us.

I don’t find readings about love, family, or careers to be challenging.  People come to those readings already knowing their personal truths.  They’re just buried deep inside them and the cards show them symbols that help them make connections that are important to them.  That part is easy.  Doing the work to change your life for the better–that’s the hard part.  And a Tarot card reader can’t do that for you.  But we can point you in the right direction.

I give Tarot readings that begin at $45.  Send me a message if you’re interested!