My name is Rashid Darden and I am a novelist.  I am also a member of Alpha Phi Alpha Fraternity, Inc.  Acting independently from my fraternity and the members who have chosen to boycott, I plan to exercise my own rights:

I will be watching the remaining episodes of Sorority Sisters this Friday night on VH1 from 9:30pm onward.

As I’ve already stated in an earlier essay, I believe that the backlash from the show stems primarily from the dangerous and alienating respectability politics of black folks.  Since that essay, and since subsequent shows have aired, I have been witness to the devolution of values of the members of fraternities and sororities who are against the show.

I’ve seen women exclaim gleefully that they couldn’t wait for their sisters to be expelled from their organizations.  The cast members of the show have spoken about the death threats they have received, but fraternity and sorority members only said “Well if that were true, the police would be involved.”

Spoken by people who have never been impacted by cyber bullying and harassment.

Perhaps even more insidious than the aggressive attacks against these women is the acts of the bystanders joining the protests.  People joined the boycott because it was the popular thing to do.  I had friends who supported the boycott who admittedly only did so because they don’t like shows which air “dirty laundry.”

I also suspect that there were those who were adamant about supporting the boycott because it positioned them to be quoted in national media as an expert in Greek life, to perhaps boost their sales or notoriety.  Can’t knock the hustle, I guess.

Meanwhile, I have seen a great deal of non-Greeks support the show.  They say to me that they are glad to see that real people are members of these organizations–not just the St. John suit-wearing, mink-flaunting, middle-aged socialites, but real women who have bills and kids and kids’ fathers–just like them.

Behind all of this backlash, some will be suspended.  Yes, some will be expelled, but hopefully not without deep conversations about sweeping codes of conduct and broad codes of ethics. Conversations need to happen about why some members are given the harshest penalties while others skip off into the sunset, saved because of their high positions in their organizations.  Saved because of the political heft of their chapters of initiation.  Why can a man who steals from one chapter be expelled from an entire national fraternity, but a national leader who steals from his entire fraternity is not?  Why justice for some, but not for all?

But these are conversations to be had within the organizations.  Perhaps the lessons learned from Sorority Sisters will be the impetus that all organizations need to create policies which recognize and reaffirm that disclosure of one’s membership does not tarnish a century-old legacy.  Indeed, tarnish doesn’t happen overnight.

Perhaps the legacies first began to tarnish when that first person decided that their organization should fund their travel rather than paying for it out of pocket.

Perhaps the legacies first began to tarnish when that first person voted “no” on a candidate because they were suspected to be “funny” or a “confirmed bachelor.”

Perhaps the legacies first began to tarnish when that first person turned their nose up at a young man or young woman who came to college at a nontraditional age. 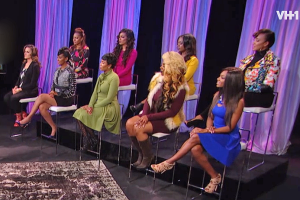 We are not perfect.  And how we have handled Sorority Sisters reflects our imperfections.  The reaction has saddened me, to be honest, especially in the midst of so much in the world we could be working on.

It’s funny to me how none of the conversations I’ve observed have mentioned how our organizations could get a handle on Sorority Sisters and use a second season of it as a vehicle for changing the culture of Greekdom itself.  Kefla Hare’s (Alpha Phi Alpha) appearance on Road Rules Australia truly made me look at Alpha in a different light when I was in high school.  Before him, I considered Alphas to be arrogant, out of touch, and pompous.  Kefla’s appearance on MTV and his representation of a real Alpha made me reconsider.  Put Kameelah, an AKA who appeared on Real World Boston in that category also.

This generation deserves to see itself in April, Cat, Adrene, Shanna, Priyanka, MeToya, Joy, Lydia, and Veronica, with all of their efforts to be good, to be better, and to be real.  We are not our sisters’ keepers – we are our sisters.  We are our brothers.  Whether they look like we look or act like we act, we are still them and they are still us.

Thank you, Sorority Sisters, for showing us as we really are–on your side of the television and on ours.