When I created Notable Alphas, it was simply an experiment.  I wanted to know whether there was enough positive news about members and chapters of Alpha Phi Alpha to provide a steady flow of content on an independent website, Facebook page, Twitter, and Tumblr.  In the past year, I’ve listened to the feedback of Brothers in my circle.  There are far fewer videos of new member presentations and less news from Capitol Hill.  There are more stories about Brothers in entertainment and in social justice.  From time to time, I will also provide an editorial or profile that has more of “me” in it—I am a novelist first, and I feel more comfortable in feature writing than hard news.

My time as an Alpha has not been without incident.  There have been extremely high peaks and there have been valleys from which I thought I would not recover.  There has been the realization that my own leadership style is better suited for a much smaller organization, therefore ending my personal ambitions; yet I was able to make significant contributions as a national committee chairman.

In recent years, I have realized that in addition to being a creative person, I am an introvert.  Introverts often perform well independently, in solitude.  I have, in earnest, reached out to members of other Greek letter organizations to see whether the talents of introverts are being properly utilized on the micro and macro levels.  The jury is still out.

For me, Notable Alphas is the best possible way for me to give back to brothers who have given so much to me.  Outside of the chapters, the districts, the regions, the conventions, there have been great men, influential men in my life who I am honored to have considered friends.  I am not talking about the Martin Luther Kings and Marion Barrys of Alpha.  I mean the roommates, the brothers I met serendipitously at conferences, the friends I made back in the days of BlackPlanet, GreekChat, and MegaGreek. 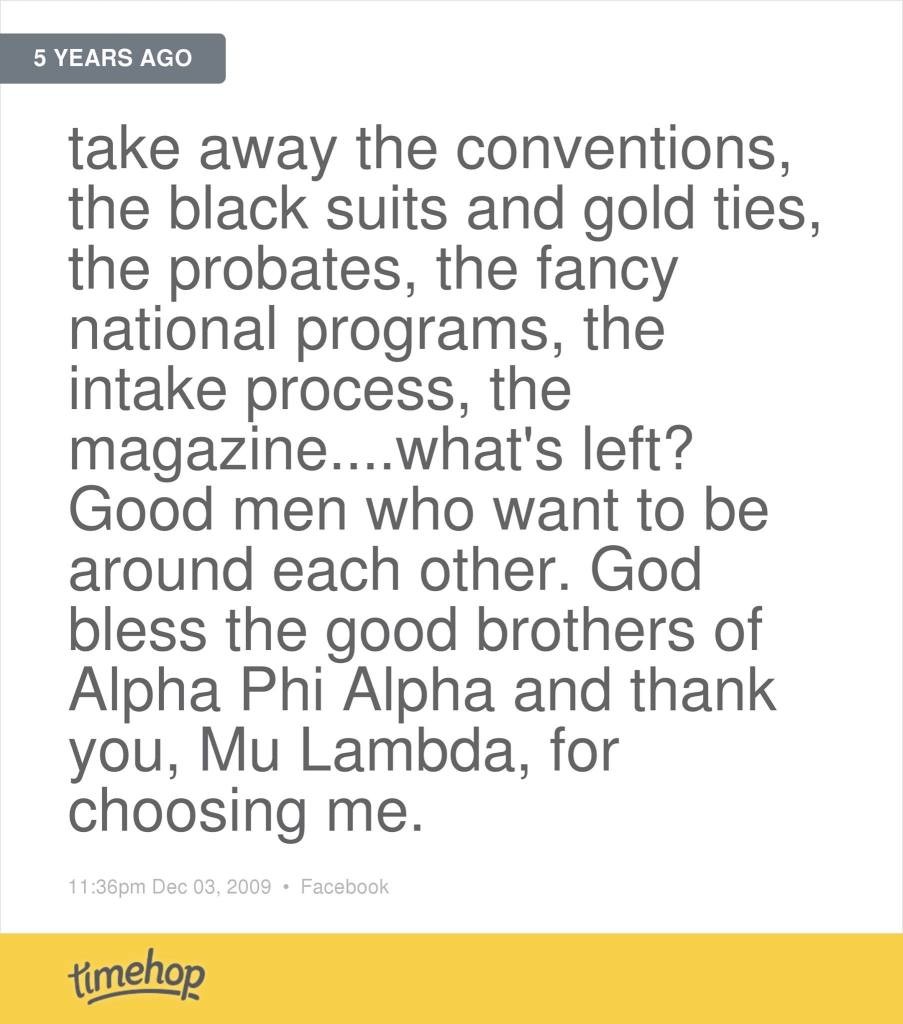 When Alpha Phi Alpha was founded, an entirely new type of organization was born.  It was social, yes, in that fellowship was a very important part of the development of its members.  And it was surely considered a general fraternity which didn’t restrict membership purely on major or class standing.  Nor was it solely a service fraternity like my beloved Alpha Phi Omega.  No, this organization was, from the very beginning, one devoted to social justice even more than fellowship, philanthropy, and academic achievement.

In the preamble to the fraternity’s constitution, there is an admonition to “destroy all prejudices.”  For my entire time as an Alpha, I have strived to embody that particular charge.  I have never hidden my sexual orientation from the brotherhood, not just because I knew doing so would kill my spirit, but because I knew that at some point in the future, I would be looked to by a younger brother as a role model.  I had to be me, in spite of the repercussions, so that the road would be easier for others.

There were repercussions.  I am still here.

I have always believed that we needed to destroy our own prejudices before we can dare work on destroying the world’s.  But now I fear that I have waited too long—the prejudices of the world are destroying us.

The time for introspection has passed.  The time has now come for action.

Alpha is what it is.  We were good.  What we used to be worked.  Though we are still what we once were, it is now time to be who we should be.

We have to be actively engaged in the liberation of our people from a system which is literally murdering us.  We cannot show up just for the protests and the photo opportunities.  We have to take deliberate actions as a body of hundreds of thousands of active and inactive members.

We have to dismantle white supremacy.  We need to arm ourselves with the many works—scholarly and accessible—that will train our members how to think critically about what is happening to us, from mass incarceration to academic inequities.

We have to expose white privilege everyplace that it lives.

We have to understand that mentoring black boys won’t prevent them from getting shot by racist police officers.

We have to cast off the years of black respectability politics that inform our current paradigm and investigate entirely different ways of service and advocacy.

We have to be feminists.  We have to be leaders in the true equality of womanhood while recognizing that they, too, exist in a system which was not designed for their protection.  We must fully stand up against our own male privilege and misogyny.  We need to stop raping women.  We need to believe women who say they are raped.  We need to stop being bystanders to behaviors which harm women and threaten their equality.

We have to end hazing.

We have to end brutality.

We have to turn up.

We have to regenerate.

We have to be so much more to so many more people so that we can simply live.

Hell has finally frozen over, Brothers.  For our people, for our future, for the world:  it’s time to fight on the ice.

Brother Rashid Darden is a novelist.  This editorial is not sponsored by any entity and was not reviewed or endorsed by Alpha Phi Alpha.